In a statement issued 3 Feb 2012, Reporters Without Borders, and the International Federation for Human Rights (FIDH), which includes the Iranian League for the Defence of Human Rights, urge the international community to take a much firmer stance on respect for human rights in Iran by raising this essential issue in the talks currently under way with the country’s authorities.

The involvement of RSF usually has the effect of focusing on journalists or bloggers who have been sentenced to death, and the statement does urge the EU and the international community to publicly condemn the unacceptable treatment that imprisoned journalists and netizens receive, but also expresses support for the appeal that 39 political prisoners, journalists and intellectuals issued on 25 January, calling for the release of all prisoners of conscience including the leaders of the protests against President Mahmoud Ahmadinejad’s disputed re-election.

The One Million Voices for Iran Campaign welcomes any and all calls for action to release those unjustly imprisoned in Iran, regardless of their sentence or their occupation. To date, discussions about human rights abuses and violations against prisoners of conscience in Iran have taken place on the sidelines of meetings to discuss economic or nuclear development issues. 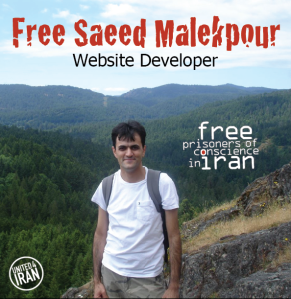 Farsnews, an Iranian news agency, reported on 29 January 2012 that the Supreme Court had upheld the death sentence that was passed on Saeed Malekpour, a computer specialist and Canadian resident. Farsnews also published a communiqué by the Centre for the Surveillance of Organized Crime expressing “satisfaction” with the Supreme Court’s decision. Malekpour’s execution is believed to be imminent.

Two other netizens, information technology student Vahid Asghari and website administrator Ahmadreza Hashempour have also had their death sentences confirmed by the Supreme Court in the past few days.

A fourth netizen, Mehdi Alizadeh, a website developer and humorist who was arrested for the second time in March 2011 in connection with his satirical posts, has just learned that he has been sentenced to death by Abolghasem Salevati, the head of a revolutionary court.

“We call on the international community to intercede directly with the Iranian authorities on behalf of these four netizens and to request the acquittal and release of all imprisoned journalists and bloggers,” the three human rights organizations said. “The issue of respect for fundamental rights must at the same time be raised during the ongoing economic and scientific discussions.”

These four netizens, aged from 25 to 40, are the victims of machinations by the Centre for the Surveillance of Organized Crime, an entity that was created illegally by the Revolutionary Guards in 2008. In March 2009, this centre announced the dismantling of a “malevolent” Internet network and the arrests of several website moderators, whose photos and “confessions” were published a few days later by the Gerdab website and other outlets.

Under torture, they admitted to having links with websites that criticize Islam and the Iranian government and to having intended to “mislead” Iranian youth by distributing pornographic content. They were also forced to confess to participating in a plot backed by the United States and Israel.

The detainees were placed in solitary confinement for long periods – more than a year in some cases – and the confessions obtained under torture were used against them at their trials. Malekpour and Asghari described how they were tortured during interrogations in letters to the judges in charge of their cases. At the same time, their defence lawyers were unable to meet with them or have access to their case files.

Mir Hossein Mousavi, the former Prime minister and owner of the closed newspaper Kalameh Sabaz, his wife, writer and intellectual Zahra Rahnavard, and Mehdi Karoubi, the former Speaker of Parliament and owner of the closed newspaper Etemad Melli, have been under house arrest since 24 February 2011. Karoubi’s wife, Fatemeh Karoubi (the editor of the magazine Iran Dokhte), who was arrested at the same time as him, was finally released in September.

Mousavi, Rahnavard and Mehdi Karoubi have been deprived of all their rights for nearly a year. Their relatives have not been able to visit them for months and are very worried about their state of health.

“The Islamic Republic must bring this unacceptable state of affairs to an end. Arbitrary arrest and the holding of political prisoners incommunicado violate international law. Such practices are tantamount to enforced disappearance, yet are widely and frequently practised by the authorities.”